The Tenderness and Tedium of Multi-Religious Events

Two Sundays ago after worship I hopped on my scooter and drove across town to Washington Hebrew Congregation, a synagogue just northwest of the National Cathedral on Massachusetts Avenue. There, hundreds of people were gathered for the start of the annual Unity Walk.

The Unity Walk started in 2005 as a means to celebrate and affirm multi-religious coexistence in the District and the world.  After an opening ceremony, participants walk along Mass Avenue and visit the many places of worship en route to a closing ceremony at the Gandhi statue outside Dupont Circle.  The walk always takes place on the Sunday closest to September 11th. This is intentional, as the walk is meant to serve as an antidote to the belief in some sort of inevitable “clash of civilizations” that motivated, in part, the terrorist bombings on that date in 2001, and that have fueled anti-Muslim and xenophobic attitudes in the U.S.

The Unity Walk is a chance to stand together across many religious, racial, and ethnic lines of difference for a different vision of the world — a world marked by deep religious pluralism that goes beyond mere religious tolerance.  It’s not just about a nice message of respect for “other paths to God.” It’s a chance to encounter the other on their terms, so to speak, by going into their sacred spaces.  How vulnerable and beautiful is that for everyone involved — the guest and the host?  After all, we know how awkward it can feel to enter into an unfamiliar sacred space, afraid you’ll do or say something wrong, a bit in awe of how foreign the space may feel to you, pushing you out of your comfort zone.  And it’s vulnerable as well for those who host — especially minority communities who are eager to share their space with those from the majority community who may know little about their tradition, or have misconceptions about it.  They are revealing their souls for others to see.  I love the tenderness of this exchange.

And so the Unity Walk is a great opportunity to meet new people in DC and to see the insides of some incredibly gorgeous places of worship along Massachusetts Avenue — including those Muslim, Sikh, Buddhist, and Orthodox. I have found in my world travels that these opportunities to stand in the sacred spaces of other religious communities have brought me closer to God. Churches and cathedrals always evoke in me a sense of the divine, of course.  They are my familiar space of divine encounter and my heart naturally cracks open to let my soul out when I enter and see the cross looming, the stained glass.  But there is also something about standing in a space that is decorated, shaped, furnished differently, designed and prepared for different rituals, marked by a different divine aesthetic that evokes no less a sacred pulse, that pushes me to encounter God in new ways. It deepens my appreciation for how big and infinite and complex God is, and how diverse is the global community’s expression of the divine that unites us.  This encounter with the other helps me see better the Great Other.  All of this is the promise and richness that can be found in the multi-religious encounter.

This year I did not make it to the actual walk, however. And the reason illustrates the pitfalls one can encounter in these kinds of multi-religious events. My plan had been to attend the scheduled 30 minute opening session at the synagogue, and then to walk for about 30 minutes — long enough to visit the recently reopened Sikh gurdwara, before needing to head to the library to get some homework done. When I arrived, I saw and chatted with some good friends and colleagues — Marc Gopin, a professor at GMU and leading scholar of religious peacbeuilding, and Joe Eldridge, founder of WOLA and head chaplain at American Univeristy (and husband to Maria Otero), and Venerable Uparatana, a Sri Lankan monk who serves as Buddhist chaplain at American University. After the requisite DC-schmoozing, I took a seat next to other First Churchers.

Unfortunately, but not surprisingly, the opening session started late.  And then the prayers began, as well as speeches, spoken word from the DC youth Split this Rock team, a rousing reflection on Nelson Mandela from the South African Ambassador, a guided meditation from the Brahma Kumaris. Every portion was lovely in its own way and together wove a rich tapestry. But soon 30 minutes stretched into an hour, and then beyond. This is often, I find, the challenge with multi-religious gatherings. In the process of seeking to be inclusive, everyone is offered the microphone. And clergy (and politicians) being who they are, the reflections always go longer than anticipated. It can make multi-religious events like these feel tedious, and unfortunately can wind up detracting from the spirit of these events. By the time we left the synagogue, it was well past the time I had appointed to get to the library, and so I missed the walk itself, and the Sikh Gurdwara (where, by the way, they were serving homemade Indian food, gratis. Gahh).

Of course I left glad to have witnessed to the important message — the symbolism of the event.  I was glad (and probably a little self-satisfied) to have made an effort to affirm and deepen multi-religious pluralism (particularly given the rise in hate crimes against Muslims in the U.S. and globally this year). Glad to have heard the prayers and poems and soaring speeches I did, including the echo of the lovely Muslim call to prayer in the space of a large synagogue and the fabulous slam poetry from the DC Split this Rock youth team.

But I wrestled again with a familiar question: how can we have authentic multi-religious expression in a manner that is less tedious? Is it possible to capture diversity and richness succinctly and still give it justice?

Read more about the event in this Washington Post article. 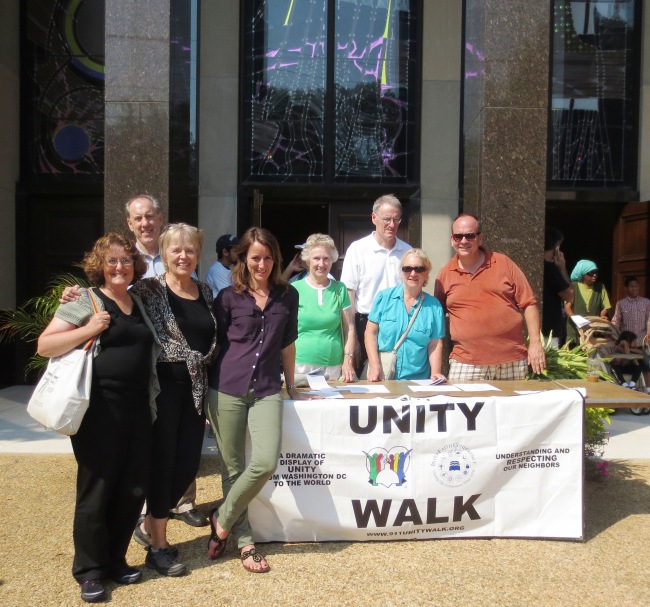 First Churchers at the walk.

This entry was posted in Current Events, Justice, Peacebuilding. Bookmark the permalink.